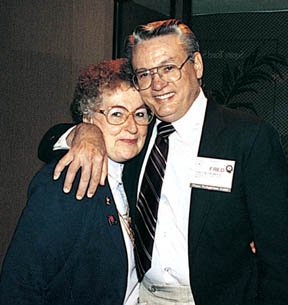 As I was a music student with a voice performance major, I had to practice six to eight hours a day in the catacombs of Presser Hall. One day a Sigma Alpha Iota sister came into my practice room and said, "Have you seen the new guy in music school? I had not but she raved so about him and my throat needed a water break, seriously, we decided to go take a look at this new specimen on the steps of Presser Hall. We had not even gone outside the front door yet when I stopped and said, "I'm going to marry him someday!" My fraternity sister said, "Oh, sure you are!!!"

Later on in the week we met and conversed and then dated for a while. As I was ready to graduate in June and he had several years to catch up as he had been in the Air Force for six years, we broke up and I went off to the Big Apple to seek my fortune! Ha! Well, I did sing with the Robert Shaw Chorale for a few years and then did some church and professional work out there but mainly work for the publicity office of Columbia Records as a secretary for Mitch Miller. ( It pays to learn how to type.)

About three years later on a very chilly Sunday afternoon in December, the telephone rang in my apartment and I answered it. The person on the other end did not say "Hello" or identify himself, but just said, "Are you ready to get married now? Have you done what you wanted to do?" It was Fred, the love of my life from Illinois Wesleyan University School of Music. We were married the following June. We have just celebrated our 44th wedding anniversary and are living happily ever after. Thank you, Illinois Wesleyan University. — Submitted by Phyllis Krahmer Tremper ’56 (husband is Frederick Tremper ’58)