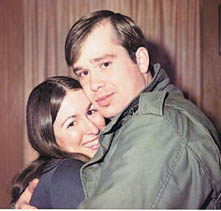 Unbeknownst to him, Dr. Richard Leonard was a dear friend of my family. . I grew up calling him "Uncle Dick".

Unbeknownst to me, Chuck had a class with Dr. Leonard.

One day, Chuck was sitting in Dr. Leonard's office, "in the hot seat", trying to explain his less than spectacular performance on the first test of the semester. Following Chuck's 5 minute explanation of Elizabethan literature, Dr. Leonard replied "I understand you're dating my niece". For the first time in his life, Chuck was speechless he was caught so totally off-guard he had to stop and think who he was even dating.

When Chuck tells the story he says; "I needed the class to graduate, so I had to keep dating Sara."

Ha, ha Chuck . I happen to know that after that meeting w/Dr. Leonard he went to every class (no skipping class), clean shaved and clean clothes and totally prepared for class. He got an A in the class and we've been married 29 years.

Follow-up e-mail response to questions: Chuck and I tried to remember back to the good-old dating days in the 70's at IWU.

To the best of our memories, us kids used to go to movies at the Bloomington Theater on weekends. We'd even walk there from campus, as there were not as many cars on campus then. After the movie, kids would go to Tobins or Pizza Hut for pizza. Or back to campus, and have Tobins delivery (they delivered pizza and beef sandwiches) and Phone-a-Feast delivered chicken.

Other popular dates were basketball and football games. Plays at McPherson Theater were always in demand, it was THE thing to do! And whatever else was "happening" on campus, ie: concerts and such. As students we were supportive of each other. If you had a friend in Terrapins then you went to see the Terrapins Show (being supportive is very noble, but it was also something for us to DO).

Weekday evening dates were "study dates". You'd meet your date at the library and then hit the Dug Out for cokes and burgers after studying together.

Sounds pretty tame, compared to today's social scene. Remember women had hours back then. Speaking of hours ... as we all had to be "in" at the same time, we girls would gather together in someone's room, have popcorn and talk about our dates. It was a great continuation of the evening.

Chuck did not "pop the question" at IWU. But I did have "a candle-light" at my house.— Submitted by Sara Lee Willis Powell,’72 (husband is Charles Powell ’70)