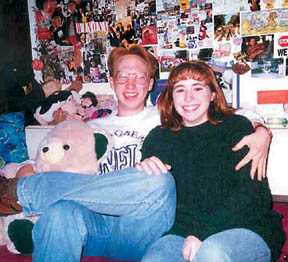 During the first week of my freshman year I befriended a fellow freshman Theatre major, Brendan Komala, while doing our "lab hours" (in this case, sweeping the stage floor). Brendan asked me to go to the movies on campus (in the art building) as a friend, and right before he came over, he called and asked if he could bring a couple more people. He brought his roommate, Pete Koenig, and a guy they met who also lived in Dolan Hall, Adam Patterson. Adam and I became friends, and although I realized after not too long that he would be a good guy to date, he really wasn't too keen on the idea. We kept in touch over the summer, writing letters and calling each other on the phone (this was right before email became popular and widely available), and still remained just friends.

Finally, in the fall of our sophomore year (Halloween night 1993, to be exact), we started dating. He asked me to marry him Memorial Day weekend 1995. We graduated May 5, 1996 at 11:00 AM, and our wedding ceremony began at Forest Park in Bloomington around 2:30 that very same afternoon! It was a very hectic day, but what a start to the wonderful life we've had together. We've been married for six years--here's to many, many more!— Submitted by Winona Mefford Patterson '96 (husband is Adam Patterson '96)