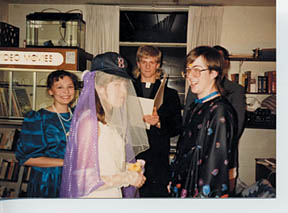 One beautiful day in late November 1987, Dave Graham '89, Karl Kics '89, Eric Gardner '89, Jodie Betts '91, and lots of other folks were walking across the quad. Eric had caught the garter at his cousin's wedding the previous weekend, and someone asked him about his plans for marriage (he wasn't dating at the time). He nonchalantly replied that he was going to marry Jodie. Jodie protested, saying that Eric couldn't just announce his intentions; he had to ask. Eric said simply, "This way you can't say no."

Within the week, their friends staged a wedding for them in Eric's room on third floor Gulick. The bride wore white, but also wore the groom's Red Sox cap. John Savage '89 served as the best man in a swank pair of boxer shorts, coat, and tie. Margie Jackson '9 was the maid of honor, and John Womick '92 (what a father figure!) gave away the bride. The right reverend Rich Varno flared his blond curls and officiated over the ceremony. Steve Larson '89 served as photographer extraordinarre

Because the ceremony went so well, Eric and Jodie decided to start dating that December.

After countless hours at SAGA, several trips to the Bakery Banc, some excellent parties in the abode of Steve and Chris Dunlap '90, and a mad abduction from the Argus offices, Eric proposed for real in February of 1989. This time he actually asked, and Jodie said yes. [e-mail follow-up, more on Argus “abduction,” from Eric: “Eric served as the Argus's managing editor, and was always there very, very late on Wednesday nights doing layout and final editing. One Wednesday, a group Gulick Hall folks stormed the Argus office, physically carried workaholic Eric from the room, down the stairs, and halfway to the Bakery Banc, where he had promised to meet Jodie and friends after ‘just editing this one last story.’”)

After literally digging for pennies to pay for their license (the Ford County Clerk didn't take checks; who knew!), they were married on June 2, 1990. Savage even reprised his role as best man (this time with pants), though the bride did not wear the Red Sox cap.