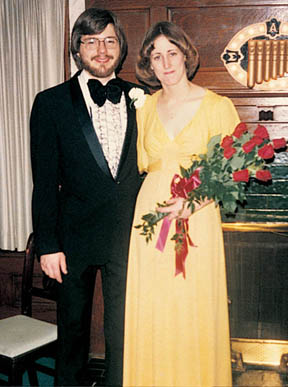 Jim Edgeton and I (LeAnne Stafford) met at marching band practice in August of 1974—I had transferred in from Carthage College, and Jim was a freshman. We were both experiencing our first year with Mr. Maury Willis. Jim played trumpet Music Ed Major, and I was a percussion Music Performance Major. I thought Jim was really cute, so I approached him first. We started talking, and became friends through the classes and ensembles of the Music School. Our first date was April 12, 1975–the Spring Formal for Sigma Alpha Iota, of which I was a member.

Presser hall was the place for us to meet—and the place to hang out together and with friends. During the next three years, there were plenty of opportunities for Jim to walk me home to the SAI house on Chestnut after hours of practice in the practice rooms. For my Senior Honor Recital, Jim and I played a trumpet/percussion duet. He had no other piano accompanist all those years at school. One not so fond memory was the semester he tried to teach me French Horn—yikes!!!

[e-mail follow up clarification from LeAnne: “yes, I was the only piano player Jim had to accompany him when he had piano parts to solos. But we both played in small groups and such. You can omit if you think is ambiguous. No worries…” And from Jim: “Yes, LeAnne was my only accompanist for all four years. I only played trumpet, so LeAnne did all of my recitals on piano. the trumpet/drum thing was just a one time deal on her recital.”]

After we both graduated, we followed the Ex IWU Dean of Music, Bill Hipp, to Southern Methodist University in Dallas for graduate work, and we both graduated with a master’s degree. We were married July 17, 1982—this was two weeks after I taught a summer band camp at IWU with Mr. Willis!! Jim taught in the Dallas school district for 11 years. In 1993, we moved back to his hometown of Fairfield, Iowa, with our two boys (now 14 and 12), where Jim is the high school Band Director. I still am the only accompanist he ever uses!!

Our memories of dating at IWU were Presser Hall, the pit at Presser, several practice rooms, East Hall (where Jim was an R.A.), walks in the quad, walks through the park, cold football games, many recitals, SAI parties and dances, B-Ville, the Cave (bringing back memories for you too??), and Avanti’s hot ham and cheeses at midnight.

This summer, we will have been married 20 years—we look fondly back at IWU—both for the romance and for our wonderful post-high school education. Thank you IWU. — Submitted by LeAnne Stafford Edgeton ’78 (husband is Jim Edgeton ’78)