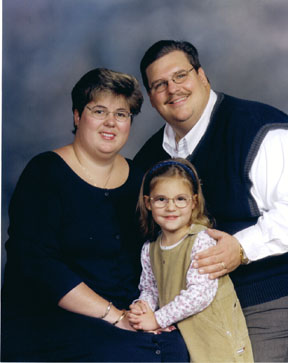 I met my wife Denise Wachtl at a Circle K meeting soon after I transferred to IWU, Fall semester 1987. Several of her dorm friends from Pfeiffer Hall were also in my P.E. class that semester. Later that Fall, Pfeiffer Hall had a dance where roommates were to find dates to the dance for their roommates. When Denise's friend Theresa West asked me to be Denise's date for this dance, I was a bit reticent due to the "blind" nature of this dance, but I agreed to go anyway. A group of us went to dinner at a restaurant who's name escapes me, but the food was horrible and the service was worse. We got to the dance and things weren't much better. Our group retreated back to Pfeiffer and ended up playing board games that night.

The next semester (February 1988), my residence hall (Gulick), had a formal and I asked Denise to be my date with a note attached to a red carnation on Valentine's Day. The magic of romance was in the air the night of that dance and we have been in love ever since. That is, despite her friends' prediction that it would never work.

We were engaged at Miller Park in Bloomington on August 12, 1989, graduated together on June 6, 1990, and married each other at First Presbyterian Church of Joliet on April 20, 1991. We celebrated 11 years of marriage this year. We have one daughter Molly who is 4 and our second child is "on the way" due in December of this year.

Do you remember popular spots that you and Denise, or other IWU couples, liked to go for dates, either on campus or in the Bloomington community?

In addition to walks around the campus and eating together in SAGA, Denise and I (and others we knew) enjoyed trips to Miller Park. Always beautiful no matter what time of year it was. The local "chain" restaurants (Bennigan's, Chi-Chi's, Bombay Bicycle Club, etc), Avanti's, Steak and Shake, and the typical fast food places were very popular w/ our crowd...decent food for a decent price. Jumer's and a restaurant in downtown Bloomington next to Bogey's that I can't remember the name of were the places to go for a "nice" dinner or more formal date. For those of age, hanging out w/ our dates and other friends at Spanky's, Bogey's, The Pub, or Mugsy's were also occasional pastimes for our crowd in the late 80's/1990.

Did you "pop the question" proposing marriage to you on campus, and if so where?

Actually no. I had planned to do so in the gardens near Buck Hall as there was a beautiful archway and bench there, however, I took Denise to Miller Park with a picnic lunch (Avanti's!) and asked her to marry me there. It was symbolic because Miller Park was where she and I spent the day together after our first formal together in March of 1988. — Submitted by Darryn W. Dunbar '90 (wife is Denise Wachtl Dunbar ’90)