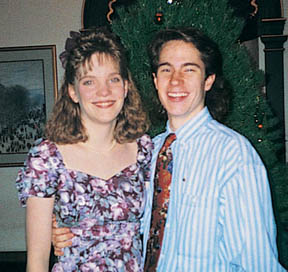 My husband [Brent Burger ’95] and I met through the Freshman Reading Program in 1991. I was a sophomore and was helping Professor Susan Brandon with her small group meeting at her house. The previous summer she had sent me the list of students and something about his name struck me. (Later I found out Brent had saved that note I sent, without even knowing me!)

When we met that first week of the fall semester, it wasn't an immediate connection since we were still involved with our high school sweethearts. But since we were both music education majors, we saw each other every day in Presser Hall. Later that semester, a friend wanted to go out with Brent's roommate and asked me to go with Brent on a double date. So, on December 6, 1991, we went on our first date, actually to ISU to see the Nutcracker and the rest as they say is history.

Our proposal was also on campus. During my senior year, I was doing a work study in the piano prep. department and was also student teaching. On September 23, 1993, Brent came in and surprised me at work in the piano prep office and got down on his knee and asked me to marry him. Of course I said yes, but I had to go to an evening practice for my student teaching so a hundred high school students found out before my family.

On June 24, 1995, we were married. Our Best Man (Jonathan Lauff '95) and Maid of Honor (Laura Borgsmiller '93) were IWU grads as well as another bridesmaid (Gina Basi McKeown '92) and groomsman (Matthew Werner '94). Being an SAI and Phi Mu Alpha, we had several IWU friends attend our wedding. Now, almost seven years and two children (the second one is due this August) later, we have wonderful memories of IWU and are thankful to have found each other.