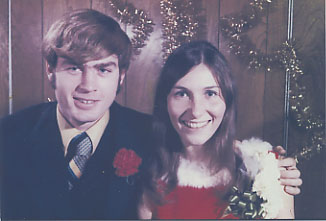 I couldn't resist responding to your request for stories about how alumni met their mates at IWU. My husband (Roger Bliss) and I (Debbie Sowers Bliss) both graduated in May of 1972 and married in August of the same year. We first met in the Dug Out on Sept 16, 1968, one week after arriving on campus for sorority and fraternity rush week (my accuracy is due to a journal I kept at the time). I was walking through the Dug Out with a girlfriend, who noticed a friend of hers sitting at a table with my husband. We joined them and talked for half an hour or so before rushing back to Pfieffer Hall in time for the women's 10:30 curfew. I was taken with Roger immediately, writing "CUTE" (in caps) to describe him in my journal.

Four days later was the traditional dance, "The Grind", featuring the Cryan' Shames. I went with two girlfriends and was hoping to see Roger there, and I did - he was with another girl. The following week we ran into each other on campus a couple times, and I had a feeling that he liked me. He finally called me on Thursday and we had our first date on Friday Sept 27. I wore "corduroy culottes" and we walked to the Irwin Theater in downtown Bloomington and saw "Gone with the Wind".

We got lavaliered on Oct 18 [1968] at the bell tower (trespassing on private property) behind the football field, and dated steadily the rest of our four years of college, breaking up only once for a few days in December of freshman year. Most weekend nights we'd end up at the Theta Chi house on Main St. (now gone) after a movie or athletic event, etc. if there wasn't a Theta Chi or Sigma Kappa party going on. On Sunday nights, Tobin's pizza was our favorite eating place, but Lums and Burger Chef were also on the list. 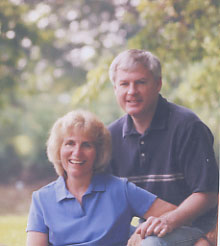 We are very nostalgic about our days at IWU, and it continues to influence and enrich our lives. We have many lifelong friendships from Wesleyan, and now our oldest daughter is a student there, so we visit campus often while she endures our constant "trips down memory lane". I always cast a fond look at the bell tower when we go to IWU football games. We will be married 30 years in August.

(e-mail response to follow-up questions): In answer to your question about a marriage proposal, I'm afraid there's not a very interesting story connected with that. There was no big moment when he "popped the question". Early in second semester of our senior year, (panic time) we decided we wanted to stay together, and marriage was the next logical step, especially with the uncertainty of the draft (his draft no. was 87) and Vietnam hanging over us. We just decided to shop for rings one day at a jeweler in downtown Bloomington, and I had a "candlelight" at the SK house to announce the engagement. We were married August 26th after our IWU graduation, and he enlisted in the Air Force, thankfully ending up in Okinawa instead of Vietnam.) — Submitted by Debbie Sowers Bliss '72 (husband is Roger) Bliss ’72)