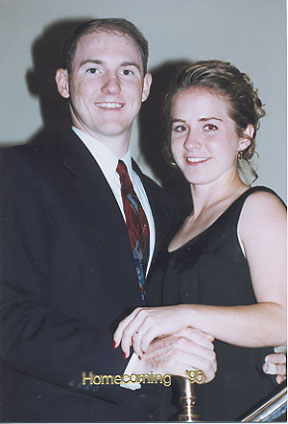 My husband Shawn and I met the spring of my Sophomore year in Spanish class. Somehow we managed to sit next to each other that first day of class and were instructed to introduce each other in Spanish. For the next 3 semesters we managed to somehow remain in the same Spanish classes with each other. The problem with foreign language classes is that they require you to choose a Spanish first name that you pair with your “American” last name. So for a good year or so, we just knew each other as German Beaty and Mercedes Gruber.

We would occasionally see each other around campus and greet each other with our Spanish names. Shawn knew I played soccer and would come to some of my games, but we still only knew each other as German and Mercedes. It wasn’t until the introduction of email at IWU during our junior year that we found out each other’s real first names and began exchanging emails.

Shawn and I officially began dating the spring of our Junior year and continued dating throughout our remaining time at IWU. Graduation, May 1996, came a little too quickly and the job search yielded us with jobs in Lincoln, IL (Shawn teaching math) and St. Louis, MO (Accounting). I thought for sure that the distance would be the demise of our relationship. Little did I know that Shawn intended to ask me to marry him.

One weekend in late August, I made the trip up to Lincoln to help Shawn move into his apartment. We decided to make the trip up to Bloomington to have dinner at Alexander’s Steakhouse (a favorite college happy hour destination – free food!). After stuffing ourselves, Shawn suggested going to campus to walk of dinner.

We spent a good half hour talking about our time at Wesleyan and how strange it would be not to be coming back as students in the fall. We stopped and sat on the old stone bench near Shaw Hall (the one where the sidewalk runs east and west through the middle of campus). It was there that Shawn proposed to me. He had said that since I was such a big part of his life while at Wesleyan, he though it would only be appropriate to have me as the biggest part of his life for the rest of his life.

We married July 26, 1997 made our permanent residence in Bloomington/Normal. Shawn teaches math at Normal West High School and coaches basketball and baseball; I work as a Business Analyst at State Farm Insurance. Not a day goes by that we are not grateful for the years we spent at Wesleyan and the opportunity to have met each other. IWU will always hold a very special place in our hearts. —Submitted by Nancy Gruber Beaty ’96 (husband is Shawn Beaty ’96)