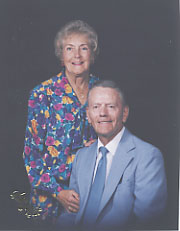 Harry and I first met at Niersheimers Drug Store in the fall of 1942. The soda fountain was a popular spot as we freshmen lived in Kemp Hall. Harry, a senior, left with many students to enter the service in February 1943. He was a B-17 pilot, serving in England. Our courtship was mainly by correspondence and seeing each other when he was on furlough. He was discharged in November 1945, and we were married over Christmas vacation that year. I had to get permission from President Shaw to marry while a student. We have lived at Minier since 1947 and spent the past 29 winters in our Ft. Myers, Fla., condo. —Submitted by Janice Snider Ahlers ’46 (husband is Harry Ahlers ’43)