Even now that it’s been renovated to new glory as the Hansen Student Center, memories of its former life as the Memorial Gymnasium still linger in the 80-year-old building’s nooks and crannies. Which is exactly as it should be, says Dean of Students Jim Matthews.

"This space is history," says Matthews. "Remarkable things have taken place here. Institutions are wise not to forget this. It kind of makes you feel good to know that there are ghosts, very lustrous ghosts, who walk through that space, and we want to honor them."

This past spring, reminders of Illinois Wesleyan history graced the center’s mezzanine level, where a temporary exhibit displayed favorite Memorial Gym memories submitted to the IWU Alumni Association by alumni, faculty, and friends. Not surprisingly, the most of those memories were associated with athletics. Fondly recalled among the Titan athletes who played on the gym floor were Dean Padgett ’58, and future IWU coaches Jack Horenberger ’36 and Dennie Bridges ’61.

For the Hansen exhibit, Curt Nord ’74 wrote about the joy of watching games in Memorial Gym as a child, when his older brother Jerry Nord ’62 played for Horenberger, and Bridges was a teammate. "I remember Coach Horenberger as being a fierce competitor who hated to lose. Fortunately, he usually had a good team." 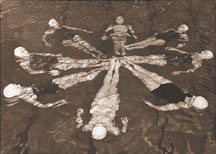 Nord vividly recalled how the scoreboard at the gym’s north end "seemed so big, and I was really fascinated by the large hands on the clock. During the last minute of each half, the clock was said to ‘be in the red’ [and] the scoreboard clock would actually turn red." After the games, Nord and other children were invited to play "out on the floor" with a basketball, and he dreamed of the day he would grow up to play for the Titans. That dream came true in 1970, when he played for Dennie Bridges, who took over the coaching reins from Horenberger in 1965.

Although varsity sports didn’t exist until the 1970s for IWU women, many were active in intramural and club sports played at the gym. "Some of my fondest memories of Memorial Gym were the intramural sports, especially badminton and volleyball," wrote Marie Ann Schlemmer Hill ’52. "We didn’t have to wear the baggy green shorts and white blouses, which we had to wear in gym class."

Another source of alumni memories was the gym’s swimming pool, which Chet Sheldon ’43 recalls as "the little tub in the basement....It was hard to believe how small it was!" It was in that "tub" that every student had to pass a swimming test before graduating. Helen McNicol Sheldon ’40 remembered one classmate who "kept putting off taking her test till the last week, and we were afraid she would run up to get her diploma dripping wet."

The pool provided a stage for the Terrapins, a synchronized swimming club which held annual shows. Barbara Krusinski Zukowski ’73 wrote about a solo performance she gave for one of those shows. "One of my friends choreographed a gymnastic sequence for me which I performed before entering the water—on the railings that separated the audience. Can you imagine being allowed to do something like that in today’s liability-conscious climate? Not likely!"

Like today’s Hansen Center, the Memorial Gym was designed as a place where students could socialize and let off steam. A boisterous, all-school dance—the first-ever in university history—was held in the gym on April 18, 1931. The event riled some trustees enough to consider banning of any future dances, or other assemblies that lowered the school’s "moral and spiritual plane." Fortunately for Illinois Wesleyan’s fun-loving students, the motion didn’t pass.

The Annual Grind, a fall mixer that gave freshmen a chance to meet each other and returning students, was held in Memorial Gym, as was the popular Hobo Dance, where the price of admission, according to The Argus, was "only one old shoe per person, delivered at the door. And the worse looking the clothing the better!" Many world-famous musicians performed at the gym, among them Count Basie in 1958 and Dizzy Gillespie in ’59. In the fall of her freshman year, Katherine James ’73 recalled that the aging, easy-listening Lettermen played a concert at Memorial Gym. "By the spring we were walking out of class in solidarity with the rest of the students in the U.S. in response to the murder of students at Kent State."

James continued: "Memorial Gym will always mean to me a transition from the old world to the new world—from old men in sweaters [the Lettermen] singing songs to people who were dressed to the nines, to young men and women singing songs to one another, wearing the uniforms of those who were trying to make peace."

The Memorial Gymnasium has served as a historical marker on many occasions, but perhaps none so memorably as in the fall of 1963. Emeritus Chaplain William White, who had joined IWU’s faculty in the fall of that year, recalled the campus reaction to news of President John F. Kennedy’s assassination. As chaplain, White decided he should put together "some sort of memorial service for those who care to attend....Within a few hours it became evident that nearly everyone on campus was planning to be present for the occasion. The only place that could hold that many people was the Memorial Gym."

On Nov. 25, 1963, the Illinois Wesleyan community united in the gym "to come to terms with shock and grief." White was reminded of the experience in the wake of last September’s terrorist attacks, "as yet another generation experienced a national tragedy and sought strength for coping through reflection and community."

Whatever the future brings, the Hansen Student Center will no doubt be as much a breeding ground for memories as when it was the Memorial Gymnasium. Within the walls of this grand, old building, a brand-new life has begun.