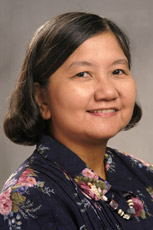 Teodora (Teddy) O. Amoloza completed her Ph.D. in Sociology in 1988 at the University of Nebraska-Lincoln, where she specialized in research methods and statistics and in social demography.  She was a post-doctoral fellow at the Bureau of Sociological Research at the University of Nebraska-Lincoln before she joined Illinois Wesleyan University in 1990.  She was promoted to full professor in 2001.  In 1993 she began a series of studies of women in rice farming at the International Rice Research Institute in Los Baños, Laguna where she has spent several summers and her first sabbatical semester.  Some of her works were published in the Journal of Marriage and the Family, Journal of Developing Societies, The ASIANetwork Exchange, and Sociological Imagination.  She has also co-edited with Jim Sikora two editions of the Introductory Sociology Resource Manual published by the American Sociological Association. She was the recipient of the 2000 Du Pont Award for Teaching Excellence, the highest teaching award at her university.  Courses she taught or currently teach include Introduction to International Studies, Population and the Environment, Women in Development, Methods of Social Research, Social Statistics, Senior Seminar, Peoples and Cultures of Southeast Asia, “Hidden” Communities, and multiculturalism travel courses in May Term.  Destinations for her travel courses include the Philippines in 1994; Thailand and Malaysia in 2000, Western Europe in 2003 and Hawai’i in 2007, 2009 and 2011.

For ten years starting 1993, she was Director of the IWU International Studies Program.  She was director of two Title VI grants for International Studies from the US Department of Education and is the principal proponent and director of the 2009-2012 Title VI grant for IWU’s Asian Studies program.  From 1996 to1999, she served on the Board of Directors of ASIANetwork, a consortium of approximately 160 mostly liberal arts institutions in North America dedicated to promoting and strengthening Asian Studies.  From 1998 until 2005, she was the director of the Student-Faculty Fellows Program funded by the Freeman Foundation, a program that sends teams of students and faculty mentors from ASIANetwork member institutions throughout the United States to conduct research in Asia.  She has done consulting work with liberal arts institutions about their Asian Studies programs and also served on the review panel for the Department of State’s Educational Partnership Program.  In Spring 2005, she became the Executive Director of ASIANetwork; at the end of her third three-year term in 2014 the organization awarded her the Van J. Symons Distinguished Service Award and named a new program, the Teddy Amoloza Junior Faculty Conference Award, in her honor.