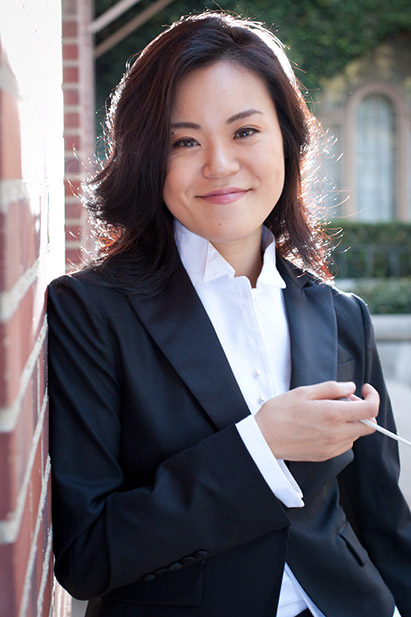 A 2015 fellow of the American Academy of Conducting at the Aspen Music Festival, Sey Ahn is currently the Director of Symphony Orchestra and Wind Ensemble at Illinois Wesleyan University. Ahn has served as the Guest Conductor in Residence at Diamond Bar High School for over ten years, whose Symphony Orchestra has won numerous national accolades. Ahn is a frequent Evaluator and Clinician at the annual Music for All Festival held in Indianapolis. She has also been the Assistant Conductor of the Music for All Honor Orchestra of America since 2012. Ahn previously held the position of Music Director and Professor of Conducting at the University of California Santa Barbara. Ahn has worked extensively with young musicians in many youth orchestras around the country. She has been invited as a guest conductor of All-State Festivals in states such as Missouri, Louisiana, Kansas, Colorado, Texas, New Mexico, Arizona, Tennessee, Iowa, and Kentucky. Ahn has led orchestral performances in Walt Disney Concert Hall and Royce Hall in Los Angeles, Benedict Music Tent in Aspen, Hilbert Theater in Indianapolis and Alice Tully Hall in New York.