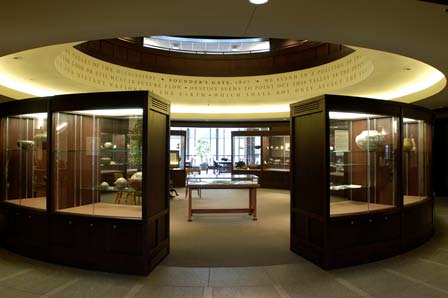 Each spring, Illinois Wesleyan University celebrates student scholarship with the John Wesley Powell Student Research Symposium. The conference is named for explorer and geologist John Wesley Powell, a one-armed Civil War veteran and a founder of the National Geographic Society who joined Illinois Wesleyan University's faculty in 1865. He was a pioneer in using field work to teach science. In 1867 Powell took Illinois Wesleyan students to Colorado's mountains, one of the first expeditions of its kind in the history of American higher education. Later, Powell was the first director of Bureau of American Ethnology, which today is part of the Smithsonian Office of Anthropology.

Walk into the rotunda and be surrounded by artifacts from John Wesley Powell's field work in the American Midwest.

If you stand near the statue of John Wesley Powell, look up. You'll discover a quote oft repeated by the late Minor Myers, Jr. during his presidency. The quote is incribed in the Founder's Gate, which marks the west entrance to the University.

"We stand in a position of incalculable responsibility to the great wave of population overspreading the valley of the Mississippi. Destiny seems to point out this valley as the depository of the great heart of the nation. From this center mighty pulsations for good or evil must in future flow, which shall not only affect the fortunes of the Republic but reach in their influence other and distant nations of the Earth.”