Past Programs and Events

The following programs and events took place at IWU in recent years. These programs feature LGBTQ+ speakers and discussions that talk about issues within the LGBTQ+ community in order to raise awareness, provide education, create inclusion, and model LGBTQ+ professional contributions.

This year, IWU hosted the 2nd annual Lavender Graduation. During this event, we honor LGBTQAA+ graduates and those that help to facilitate a safe and welcoming learning environment during their time at Wesleyan. 2015 highlights included:

Amelia Smith
Amelia speaks of her experience as a part of the "plus."

Preparations are complete.
The diploma table is prepared with materials for honorees.
❮❯

This year, we held the second annual Safe Zone Reception. This reception served to honor members of our IWU community who have successfully completed the Safe Zone workshop requirements in order to obtain certification. The short program featured:

Each year, Pride hosts a drag show in Hansen Student Center. Students are welcome to participate and some of the most well-known drag queens/kings of Blo-No perform as well. It is tradition to dress in drag, but of course there is no required attire. The funds raised (over $300) were donated to a charity, Prairie Pride Coalition, to support progressive efforts in the community.

"Harvey Katz manages to give voice to a community that needs to be heard; he is an artist who knows the power of word and uses it wisely. His performance poetry is rapid-fire word-play that shines light on lives that rarely get airtime. His heart-on-the-sleeve linguistic exploration is matched by his enthusiastic, potent performances. Through the course of one poem, he manages to bring the audience to the verge of tears and turn them on their heads with laughter. He is compassionate, complicated and a seasoned performer."

"On this day we talked about the importance of Trans* inclusion on campus and across the country.Office of Diversity and Inclusion director Brandon Commons and Chaplain Elyse Nelson Winger gave remarks. Then the names of trans victims of abuse and suicide were read off and a candle lit in their honor." Source: IWU Pride Facebook

Christina Karhl shared with us the hardships and triumphs of being a transgender female in her family, career, and the American culture. She unraveled her original confusion and attempts to mask her actual identity to fit into the norms of a cisgendered society.

In collaboration with the Office of Student Activities and Leadership Programs, The IWU PRIDE Alliance brought Jen Kober to campus this fall, for her second appearance at IWU. Jen Kober is a comedian who has appeared on Fox and FX networks and in movies like Paranoia and the Grudge Match.

"Coming Out Muslim: Radical Acts of Love" was an enlightening performance, performed by Wazina Zondon, that exhibits the life of a queer Muslim who faces many forms of discrimination, while acknowledging the beauty of her multifaceted identity. It's a storytelling performance that explored all avenues of her intersectionality from romance to faith. 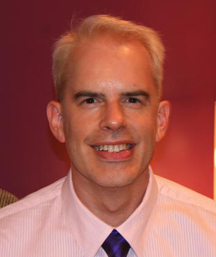 The PRIDE ERG (Employee Resource Group) at State Farm and members from IWU Pride joined together to learn about how to get involved with PRIDE at State Farm during the upcoming year.

Remarks from the following people were provided at the event:

This year marks IWU's first ever Lavender Graduation celebration! We recognized 15 graduates who have shown commitment and dedication to the LGBTQ+ community on campus.

We had students perform two musical selections, provide readings, and reflections from their time here at Wesleyan. We also recognized two faculty allies--Jennifer Crider and Joanne Diaz--for their support. In addition to the wonderful contributions from students, Provost Jonathan Green also provided remarks!

On March 29, 2014, Illinois Wesleyan University hosted its first Pride Summit. The theme of this year's event was titled Identity: Who I am on the Inside and Outside.

The day started out with breakfast followed by an activity called What I Wouldn't Sell, Trade, or Give Away. Participants brought an item following this criteria and presented it to the group.

The next activity was called My Style, Your Style, Our Style. This activity helped us all connect as we realized our similarities and differences.

Finally, a panel of alumni spoke about being LGBT+ and out in the workplace.

Robyn Ochs presented her workshop titled Loosening the Gender Girdle: How Gender Affects You on Tuesday, March 25th in the Hansen Student Center. Robyn Ochs took participants through a series of activities, all aimed at gender and how it affects us in our everyday lives.

Diana Chittester is a progressive, indie, and folk musician who identifies within the LGBTQ+ community. She performs solo with only an acoustic guitar and her vocals. Her unique way of playing guitar allows her music to have the effect of multiple guitarists and drums playing at once.

Safe Zone members gathered to recognize the achievements made in the LGBT+ community on campus. Newly  certified members were presented with a certificate of induction for their work in help supporting the LGBT+ community and learning how to be a good ally. The new Safe Zone logo was also revealed at this event.

President Wilson spoke on LGBT+ inclusion at IWU and the progress made so far this year.

Charlene Carruthers '07 is a queer, black activist and an IWU graduate, who majored in international studies and history. As a student, she co-chaired the Intercultural Leadership Alliance, established in 2005 to promote cultural diversity. She was also active in the Black Student Union, Student Senate’s Executive Board and several other organizations.

Today Charlene is a special initiatives manager at the Women’s Media Center in New York City. In 2011, she was recognized by Campus Progress as one of America’s 10 Most Daring Young Black Activists.

At this event, she addressed what it means to help assemble and lead a growing movement of young Black leaders in America today and came out as a queer woman of color.

A display was placed in the hallway in the Dugout about gender expression and identity around the world.

The poster reads: "There are many vantage points when you look at the earth, much like the different views on gender. If you only look at something from one point of view, you’ll miss so much! There are over 30 genders in various cultures around the world, both historically and in modern times. This map is an upside down Van der Grinten projection map which provides us with a view of the earth as it really is, instead of simply trying to make everything look equal. Our views of this earth should not be limited. Likewise, gender should not be limited to simply men and women. Some cultures persecute people who do not fit the gender binary and others admire them. A few of these cultures are listed with more information and answers to the questions on the other side of the paper."

A display was placed in Ames Library relating to the LGBT+ community and the Olympics in Russia.

A comprehensive climate survey was conducted at IWU in spring 2013 around LGBTQ+ identity. This session presented the survey results and progress made to date in creating a more inclusive campus for LGBTQ+ people and allies. The PowerPoint presentation presented at the event is located here: (.pdf)

Karla Carney-Hall, Vice President for Student Affairs and Dean of Students, spoke at the Trans* Day of Remembrance vigil, offering the following remarks:

"On this Trans* Day of Remembrance, I am struck by several things:

First, remembering comes from a place of care – we remember people we love and care about greatly.  We care about others and their journey.  We care about their pain.  Today, we honor Trans* people who have been lost to violence and hatred.

Second, while “remembering” is shared with other national holidays, on this day, we raise up humanity and equality, while raising awareness about discrimination and hate.  We hope for change, compassion, and an end to injustice. Searah Deysach is the founder and owner of Early to Bed, a sex toy shop in Chicago, IL. Searah speaks to colleges' queer and feminist organizations and classes, providing education on safe sex practices. Other organizations she has worked with include the Chicago Women's Health Center, Lesbian Community Care Project, and the Broadway Youth Center, amongst others.

Dr. Maura Cullen is the founder of the Diversity Student Summit and author of 35 Things Well-Intended People Say: Surprising Things We Say That Widen The Diversity Gap.

She lent her LGBTQ experience and voice to an engaging discussion about microaggressions--interactions and miscommunications between people of different races, cultures, genders, etc. that can be hurtful, harmful and destructive.

Can an LGBTQ+ person be religious? What about an LGBTQ+ couple raising children? Dispelling Myths was presented by Illinois State University faculty member, Christopher Horvath and IWU students, Christopher Richardson and Aaron Woodstein.

Myths such as those relating to promiscuity, jealousy over emotional affairs vs. sexual affairs, the standard view and   stereotypes about different LGBTQ+ groups, and the facts about homosexual and heterosexual couples raising children were some of the main topics.

Faculty/staff and students attended the March on Springfield in the fight for marriage equality. This was done in order to promote the "Religious Freedom and Marriage Fairness Act", which was approved by the Illinois Senate with Governor Pat Quinn's support.

IWU alumni, Chad Maxwell, spoke at the Homecoming LGBT Brunch during Homecoming week at IWU. Discussions were held following this.

NO H8 is a charitable organization designed to promote equality through visual protest.

A discussion was held with IWU Alumni about LGBTQ+ related events and questions about the community.

A party was held to tell coming out stories and discuss the issues that people face during the  coming out process, aswell as how you can be a good ally for those who are in the process.

Out for Work Conference - September 27-29

This conference took place at University of Illinois at Chicago, featuring workshops, breakout sessions, and keynotes by Steve Walker, Mona Noriega, and Selisse Berry. This conference also featured 31 companies that promoted their career and internship programs.