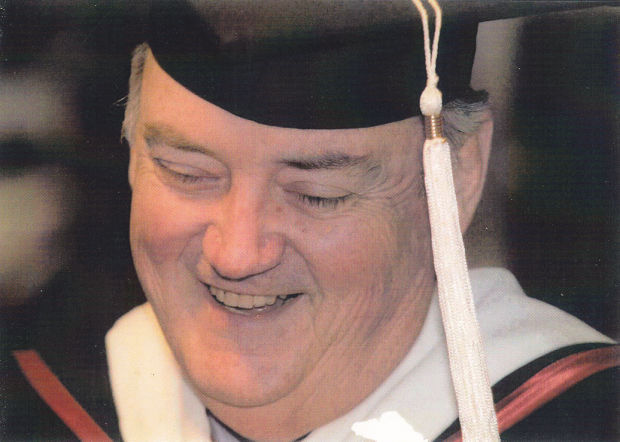 Celebration of Jim's Life--Wednesday, April 16th, 4 pm in the Young Main Lounge of the Memorial Center

All are invited to a Celebration of Life service for Professor Emeritus James McGowan tomorrow (Wednesday, April 16) at the Young Main Lounge, Memorial Center. The gathering begins at 4 p.m., followed by a meal in Joslin Atrium.

James died March 7. He was a member of the IWU English department from 1969-2000 before retiring.

For years he soldiered on heroically despite his increasing disability caused by pulmonary sarcoidosis. He never smoked.

Jim was born June 7, 1938, in Neptune, N.J., the eldest son of Martin Raymond McGowan and Ruth Denise McGowan. They predeceased him, as did a younger brother, John Charles.

He was educated in Freehold and Howell Township schools and graduated from Middlebury College and Rutgers University with a doctorate degree in English. He carved out a distinguished career as a teacher, poet, traveler and translator, with noteworthy publications in his name.

The family enjoyed time in Southwest Harbor, Maine. They all survive him, as do three grandsons, Benjamin, Joseph and Eric Visser, Las Vegas, Nev.

Memorials may be made to Illinois Wesleyan University or United Way.

Condolences and memories may be shared at www.calvertmemorial.com.

Professor of English James McGowan has served as director of IWU's May Term Program for the past four years.

During his teaching career at IWU, McGowan received numerous awards for his poetry, including the Illinois Arts Council Literary Award in 1980. McGowan also participated in the Illinois Author's Book Fair held at Illinois State University's Milner Library in November 1995, and acted in Heartland Theatre's production of Tennessee Williams' "Cat On A Hot Tin Roof."

A native of Neptune, N.J., McGowan received his bachelor's degree in 1959 at Middlebury College and a master's degree in 1965 and a Ph.D. in English at Rutgers University in 1968. McGowan's interests include the historical consideration of American poetry and the poetry of Charles Baudelaire. In 1975, McGowan published 66 translations of the original French version of Baudelaire's poems "Les Fleurs du Mal" (The Flowers of Evil). McGowan's other publications include a poetry book entitled "Each Other--"Where We Are," and "Benchmark: Anthology of Illinois Poetry," which he co-edited with Lynn Devore, IWU associate professor and chair of the English department.

McGowan is a member of Illinois Writer's Inc. and various local literary and historical societies. He resides in Bloomington with his wife Anne. The couple have three grown children.

In retirement, McGowan plans to travel to Ireland and write poetry.

Poem for the Inauguration of Richard F. Wilson
by James McGowan, Professor of English Emeritus

This is a happy day at IWU,
bestowing trust upon a man to lead us
in our work in offices, in classrooms,
laboratories, studios - pursuing knowledge,
as we say, and hoping to inspire
students to begin the quest for wisdom

If we can. But it is rare, this wisdom,
and is it often seen, even at IWU?
No guarantee, though we persist, and may inspire
students and ourselves toward this high goal. For us
it's best we concentrate on knowledge.
“Knowledge” and “college” rhyme. Our classrooms

are appropriate for its pursuit - classrooms
of philosophy, of science: the “wisdom
of the ages” or the sudden thrust of knowledge
at the cutting edge. At IWU
things sometimes happen that astonish us.
Teachers and students work together to inspire

breakthroughs in physics, or a poem may inspire
a piece of music. Practiced in our classrooms,
art displays, performances extend to us
a felt experience, a kind of wisdom
of imagination, proved along the nerves. You
need this too, another kind of knowledge.

There is a menace in America today: Knowledge
mis-valued by myopic moralists, who inspire
bigotry we must deplore at IWU,
smug ignorance we must challenge and oppose. Classrooms
of learned give and take expand our minds Wisdom
may be elusive anywhere, but as for us

we see where wisdom's not. It's up to us
to meet the new Know-Nothings in the name of knowledge,
excellence of intellect, a sign of wisdom.
Sicne is spurned, language debased; let us inspire
Attention, mental vigilance in all our classrooms.
May you be steadfast in this struggle, IWU.

We stand for knowledge as we hope for wisdom
to inspire us in classrooms, in our lives.
Scientia, Sapientia. IWU.