25 New Scholarships Established
At the 2011 Scholarship Benefactors and Awards Recipients Dinner, Illinois Wesleyan announced 25 new scholarships named in honor of the donors who made them possible.

Tucci Gift Establishes New Endowed Professorship
In a lasting tribute to the professors who transformed his life, Byron Tucci '66 has established a new endowed professorship.

Gifts of All Sizes Make an Impact
Wesleyan Fund giving by alumni such as Amanda Watson '01 and Ross Straseske '06 will be a key to the campaign's success.

Chuck '50 & Jay Ames '49 Make $25,000,000 Endowment Gift
The Ames' gift, the largest in University history, will go to the endowment and be used primarily to name endowed faculty.

Roger & Stevie Joslin
$1,000,000 Building Addition
With this gift, the Memorial Center will be expanded with additional meeting, reception and banquet space with views overlooking the main quadrangle.

Shirk Family
Endowment Gift
The Shirk Center, an important asset to the campus and community, will maintain its bright future with this gift from the Shirk family. 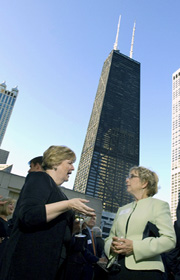 ▷ See a Photo Gallery from campaign kickoff galas in Bloomington and Chicago.

▷ Watch a video recording of the Transforming Lives campaign announcement to faculty and staff.