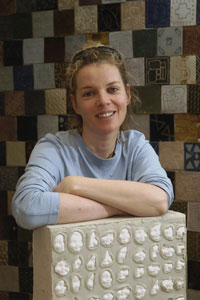 B.F.A from Limerick College of Art and Design, M.F.A from Illinois State University

Therese O'Halloran began her studies in Ireland at The Limerick College of Art and Design where she received a B.F.A. She continued graduate study at Illinois State University and recieved the MFA degree. O'Halloran's interest in ceramic sculpture has drawn her to studies in Holland, Wales, Scotland and Russia. She has attended workshops with Paul Soldner and Peter Voulkos. O'Halloran has had over twenty exhibitions in the United States as well as many European shows. She aspires to be a world-wide traveler. Her journeys have taken her to China, Japan, and South America. She is currently represented by galleries in Ireland and the United States.

"My work investigates areas of body fragmentation, both spiritually and intellectually. Reference to cycles of life, death and rebirth allude to the timeless questions of human existence. In relation to these questions, the work has strong visual connections to past cultures and their traditions. Through the multiplication of singular body parts I suggest a loss of one's personal identity. Yet due to its numbers this manufacturing establishes a strong sense of majority. This visual force allows the viewer to question their own place in the relation to its power."