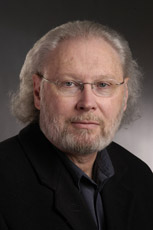 Miles' most recent solo exhibitions were at the Neville Museum in February, March and April 2011 and William Havu Gallery in December, 2011 and at the Dubuque Art Museum in August 2012.

Miles Bair’s deceivingly simple imagery and straightforward juxtapositions convey the temporal coexistence of cultural edifice and nature in both the real and the imagined world. He directs us to the ethereal beauty of natural spaces. Bair’s paintings have a highly resolved, handmade quality—a dot pattern emerges. The dots do not reference the pixel or digital processes; the dots simultaneously create illusions of solidity and space while breaking down  the painting surface into a series of small marks. Large areas of gold or silver gilding evoke Japanese Kano and Rimpa screen paintings. These gilded passages suggest a balance of orders and metaphorical meanings while integrating an architectural sensibility into the paintings. Bair frequently visits and works in Japan where nature and culture are intertwined. In Japan, gardening is a centuries-old high art. In Bair’s work, as in the garden, the traditional elements--waterfall, rocks, trees, and birds, all convey subtle meanings and elicit a sensual response. Although the artist’s work is influenced by Japanese aesthetics it is also situated among the traditions of early Modernism and American scene painters.

" The sun and the moon, and the days and the months, are eternal travelers-all. The years wander on upon the sea, traversing creation, drawn by windblown clouds, into a lifetime of wandering. Every day is a journey, and in the journey itself, one finds a home."  - Matsuo Basho from the Narrow Road to the Interior.